In 2021, for the first time in 26 years, a world conference on women’s rights is being held: the Generation Equality Forum. It kicked off in Mexico City in March and will culminate in Paris in June 2021.

To contribute to the success of this major event and to advance equality and women’s rights, XOESE, the Francophone Women’s Fund and the Congolese Women’s Fund launched the campaign JE M’ENGAGE!

The goal of this campaign is to mobilize local actors in Francophone Africa and Haiti to make concrete commitments in support of the six Coalitions of Action and the Women, Peace and Security and Humanitarian Action Facility to be launched during the Paris Forum.

On this page, you will find everything you need to know about our campaign, I COMMIT!

The Generation Equality Forum (GEF) is a global gathering for equality between women and men, organized by UN Women and co-chaired by France and Mexico, in partnership with civil society. It kicked off in Mexico City from March 29 to 31. The Forum will culminate in Paris from June 30 to July 2, 2021.

Despite the commitments made in Beijing, and the progress made since, no country can claim to have achieved equality between women and men today.

The GEF will therefore take stock of progress made and accelerate progress by developing an agenda of concrete actions to achieve gender equality by 2030.

At the heart of this commemoration is the multi-generational advocacy campaign launched by UN Women: “Generation Equality: For Women’s Rights and an Equal Future”. To meet the challenge of women’s empowerment, actors of all ages, genders and sectors must be involved.

Currently, the commitment of Francophone actors in this process is insufficient. This is why XOESE and its partners have decided to launch the JE M’ENGAGE!

On May 12, 2021, XOESE and the Congolese Women’s Fund launched the I COMMIT! campaign at a Zoom meeting with their partners. 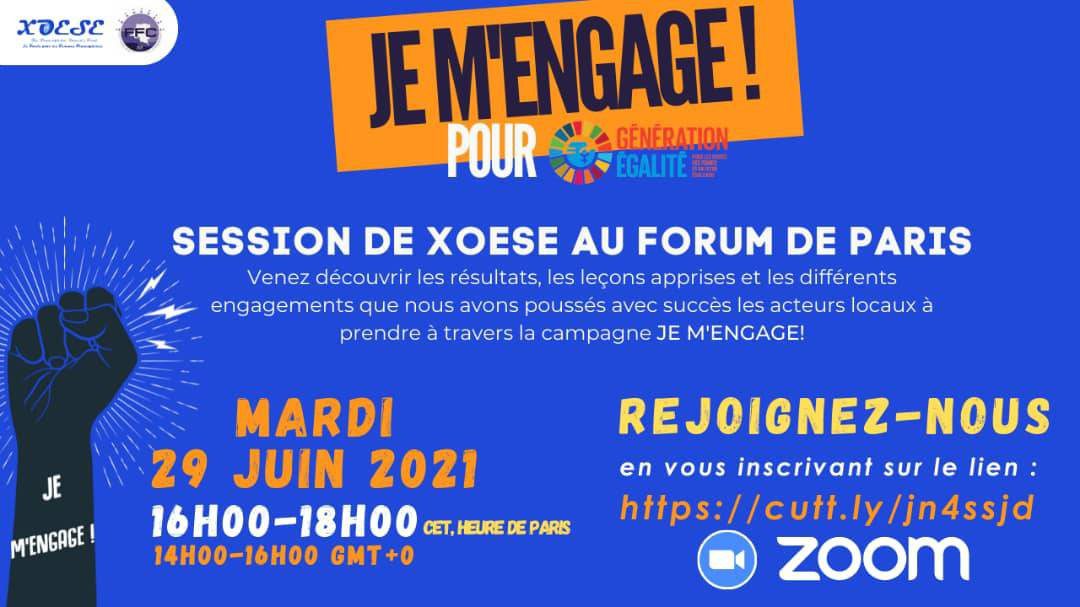