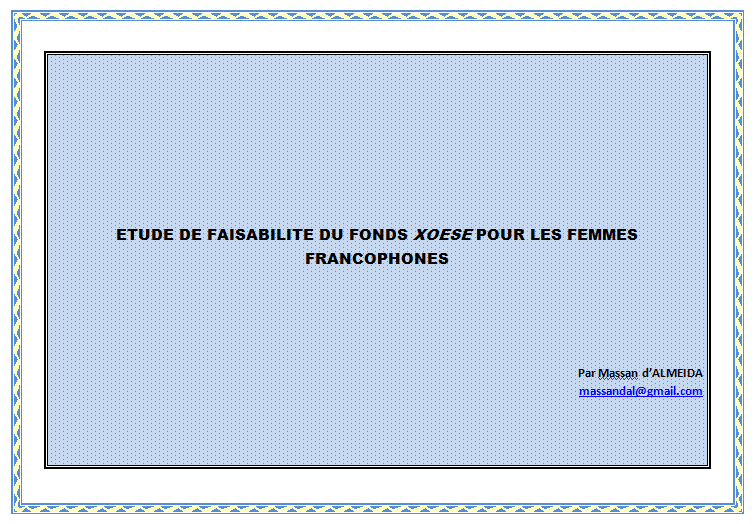 Realization of the feasibility study of the XOESE Fund

This feasibility study of XOESE, the Francophone Women’s Fund allowed to compile in the first chapter general information on the countries of our geographic scope. This is information about the geographical, administrative, demographic, political and economic situation of the French-speaking countries of the Great South which are targeted by the new Fund. The aim was to foster knowledge and understanding of the context and exogenous factors that may influence the work of women’s rights defenders and organizations in these countries.

In Chapter 2, we presented the status of ratification of international and regional legal instruments on women’s rights and the efforts made by countries to harmonize their legislation with these instruments. We have included a non-exhaustive summary analysis of the level of implementation of the texts on gender equality, the progress made and the obstacles that still persist in the following areas: health and social, education and culture, parity, political participation of women, peace, security and conflict management, gender-based violence, access to justice and access to resources.

In Chapter 3, we sketched an analysis of the situation of women’s rights activists and their organizations; we have shown how their educational profile, their training and professional experiences, the Nordic colonial legacy linked to the associative model and the central place occupied by money and funding in their way of engaging influence the results of their actions .

Chapter 4 addresses the issue of the challenges of funding women’s issues in Francophone countries of the Great South for both donors and recipient organizations. The former complain about the quality of the project / program proposals submitted to them and the weakness of the internal organization of women’s structures. While the latest complain about the growing difficulty of accessing funding due to the complexity of donor procedures, misunderstanding about project selection criteria, the silence of some donors who communicate very little with applicants and the working language of some donors who require that the files be submitted in English.

Chapter 5 explores the funding needs of women’s organizations on which the new Fund could focus, but not limited to, such as organizational strengthening, institutional support and project / program funding.

Chapter 6 first identifies some of the factors that may hinder the creation and operation of the new Fund, including its perception as a potential threat or duplication of existing Women’s Fund actions, the inability of its leaders to mobilize funding for its operation, and the difficulty of the new Fund to live up to its own ambitions. It then encourages the Fund’s initiators to show openness and a spirit of collaboration with all existing Funds and institutions in order to aim for complementarity of actions and not competition. It then presents the opportunities for access to financing, creation of synergies and reinforcement that represents the creation of this new Fund for women activists, organizations and the French-speaking women’s rights movement. Then he makes a number of recommendations regarding the materialization of the Fund’s creation idea, namely: its promotion, its priority areas of intervention, its approaches, its beneficiaries, its structure and its operation.

Finally, the last chapter presents some funding mechanisms for women’s issues in the countries and regions of the Great South Francophone with which the new Fund could collaborate and from which it can mobilize its resources. It also presents a list of ideas for parallel initiatives that the new Fund can draw on to ensure its financial autonomy and reduce its dependence on external financing.

The study concludes with a list of recommendations for the first actions of the new Fund including conducting a comprehensive study on the state of the Francophone women’s rights movement in order to understand its challenges, the root causes of its ills and draft solution approaches, and establish working / collaborative relationships with existing Women’s Funds, gender ministries and women’s issues in countries, subregional, regional and international institutions.